You are doing a fine job of interpretation for CASMA.  If I may say so, but I want to enter a small caveat.  To paraphrase the novelists, any resemblance between my work and Dali’s is purely coincidental.  So and Dali’s is purely coincidental.  So far as I know, there is nothing that I have learned from Dali.  But since he has arrived at Mariolatry through Freud, I have become convinced that his art would be alive today if he had learned something from me.  May I point up our cleavage?

In Paris, where I knew him, Dali loathed nineteenth century naturalism and went after it like a screaming buzzsaw.  In fact there never was a surrealist, from Breton the hierophant to his last follower, who did not execrate, curse, and despise naturalism, or who in his effort to “discredit bourgeois ideology” did not consider it Public Enemy Number I of surrealist theory.  Dali developed a highly personal series of antinaturalistic distortions which would not have been tolerated in the old salon.

As for me, I was a reformed abstractionist returning to the visible world, and I argued that no artistic technique can be good or bad in itself, but only in its use.  To cut the story short, if anyone today should set a Dali alongside a Miran he would instantly see the difference caused by our respective views.  Dali’s drawing is a highly personalized romantic baroque.  My drawing is straight “classical” naturalism, the very kind that all surrealists have violently rejected.

Again, Dali narrowed the entire range of possible symbolical meanings to so-called super-realities of Freudian sexual innuendo.  I, on the other hand, searched for realities of the present, and seriously tried to live up to the implications of being the artist in our age.

To gain true perspective, one should remember that the symbol as such is a prior element.  “Man”, says Kenneth Burke, “is distinctively a symbol-using animal.”  The symbol cam aeons before surrealism and can be traced all the way back to primitive pictographic writing on stones, which may have antedated human speech.  It would be in my nature as a man to be capable of using symbols, but the question is this:  why should I use symbols in my pictures?  Why not just paint what the eye sees?

My considered answer to this question may be introduced by a quote from the symbolist poet, Yeats, who said: “A symbol is indeed the only possible expression of some invisible essence.”  And since it is always “some invisible essence” that I set out to paint, symbolism in the prior and generic sense is necessarily at the center of my work as its operative mystery.

Now look again at my picture in the CASMA show at Red Men’s hall.  “Merry-go-round” is a new and personal vision of the Four Horsemen of the Apocalypse as they ride through the ruined cities of our world.  The Four Horsemen are real in this world, but they are invisible essences.  I cannot paint them as actuals seen with the eye, but I can paint my attitude toward them, my reaction to their reality, the emotional effects of fantastic horror that contemplation of Death, War, Pestilence and Famine have produced upon my aesthetic sensibility.  It follows that nothing in the picture is to be taken literally.  Everything is a symbol, and all the symbols are put together as a narrative landscape of the mind which art-lovers can read according to their experience.

To dig deep into the sources of my style, I owe nearly everything to the writer whom many Europeans consider America’s foremost literary critic, Edmund Wilson.  In “Axel’s Castle,” 1938, Mr. Wilson predicted: “And so we may see naturalism and symbolism continue to provide us with a vision of human life and its universe, richer, more subtle, more complex, and more complete than any that man has known – indeed, and they have already so combined, symbolism has already rejoined naturalism, in one great work of literature, “Ulysses.”

This prediction has been my touchstone, as it has been that of the serious younger American novelists.  Following Mr. Wilson’s guidance, I studied and mastered nineteenth century naturalism.  My symbolism was my own, and yet it depended for inspiration on certain ancestors, the French symbolist poets:  Baudelaire, Rimbaud, Mallarme, Lautreamonte – and of course our own Edgar Allan Poe, whose works and particularly the lecture “The Poetic Principle” had in 1847 stimulated Baudelaire to start the symbolist movement.  These poets were rebels, and what they all rebelled against was the nineteenth century naturalism.  In one sense their symbolistic poetry was nothing if not a technique for the complete repudiation of the very naturalism which I had adopted.

Here appeared the creative paradox of my painting.  At the one pole, objectivity.  At the other, subjectivity.  The symbolists could not balance these extremes:  how could I do it?  Very simply, after all.  Baudelaire – who began the modern revolt against objectivity – was himself the author of a thoroughly objective principle of art which he called “Modernite,” or awareness of the unique qualities of the modern world, of modern life, of modern times.  “Modernite” as I knew it was too subtle and too complex to be directly painted.  It could however be painted indirectly by means of symbolism.  But what about Baudelaire’s objective principle of art, which must surely enter the technique somewhere?  I found that the subjective symbol itself gained an immeasurable new increment of both popular and esoteric communication by the eloquence of objective representation, i.e. by painting the symbol in a naturalistic manner.

As you can deduce from the present CASMA show, in a century of social upheaval and perpetual war, many artists retire from avant-garde experimentation and move toward the conservation of certain comforting orthodoxies, chief of which is “artistic” art.  Only two weeks ago the British poet and critic Stephen Spender went so far as to recommend crawling into a poetic hole.  He said that “in order to be civilized {today} one must retreat from horror and assert the value of poetry at a certain distance.”  I am all in favor of the poetry and painting of escape, but still I disagree with the principle of flight, which does not match the American spirit.  By its content of horror, “Merry-go-round” stands in absolute opposition to any such pious shrinking from the reality that all of us must face up to or perish.  Many a fine novelist – Dickens, Dostoievsky, Farrell – has worked “beyond provinces of art” and there is no reason why a painter should not do so if a too “artistic” art stands in his way.

Because the over-artistic artist, have failed to be truly modern in the sense of an awareness of the modern world, I believe that the time has come for a post-modern art which, instead of running away will go all out to reconcile creative sensibility with the world in which we live, just as the best art of the past has always done.  Witness by “Manifesto for Post-Modern Art” issued at the founding exhibition of post-modern art in New York City in 1951.

NOTE:  We believe the painting “Merry-go-round” is here: 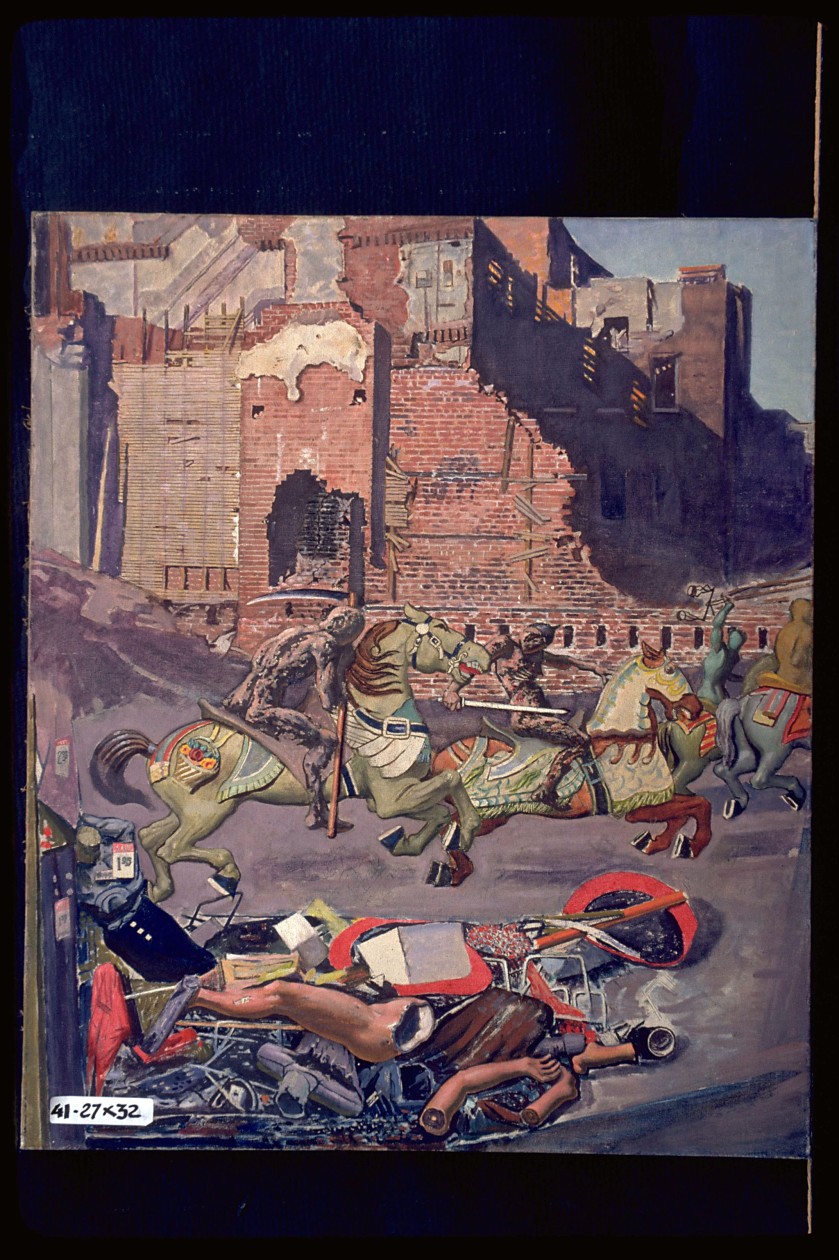